Yes you heard it right! Comedy Masala, that made a huge noise in February this year is here to make louder noise this time with their second series of 4 shows over 3 nights starting the coming week from the 27-29th of April featuring the Season 3 WINNER of the Hit NBC TV Show ‘Last Comic Standing’ – ALONZO BODDEN who is a comedy bigwig, an Actor and a Voice Over Artist as well..  Woohh! Alonzo has blown peoples’ minds off with his appearance on The Jay Leno show & Late Night with Conan O’Brien.

Supporting Alonzo, the opening act will be performed by an upcoming rising talent, Eli Nicolas who made his debut on FOX’s show “Laughs”.

Unlike last time, where we had 3 brilliant international comedians, Dwayne Perkins, Paul Ogata & Matt Davis.. This time around we have just Alonzo single-handedly ready to take over the stage and get the audience ROFLing.. That is some pretty heavy stuff 😎

If you still don’t know what I’m talking about.. Then do the following

1. Bang your head against the wall

2. Log onto www.comedymasala.com/pk to book your tickets and check seat availability for the shows or call 021 – 3890 9914 for free delivery to your doorstep

Comedy Masala is founded by Umar Rana, a Pakistani comedian who will also be hosting these 4 shows here. CM is headquartered in Singapore and is rated as one of the Top 10 weekly comedy nights by Traveller.com. CM hosts a large platform that caters to a bunch of comedians from North America, Australia, Europe and SE Asia.

Now that Comedy Masala International has made its mark in Karachi, they will keep bringing in more shows and more international comedians to come to Pakistan,  seriously before this, only local stand up comedians would hold small scale shows in Karachi or a very few big cities, but with this, the gateway to international exposure opens up,  and they too get a chance to come to Pakistan and experience our people who have yet to become accustomed to that cheeky,  bold humour these international comedians offer since they tour globally and cover a vast variety of topics, they have a lot to offer to this audience.

So far CM has only performed in Karachi, and has more shows coming up in later part of this year. While they’ll also launch the shows in Lahore & Islamabad in 2018.

The upcoming shows for Karachi In July, October & November are as follows 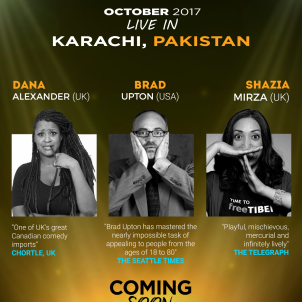 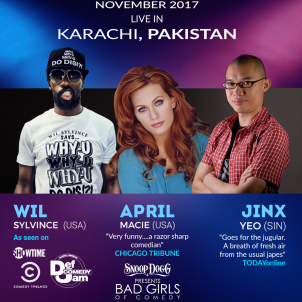