There’s something seriously sexy about good smelling food – the mix of highly fragrant spices and herbs, the tossing and turning of freshly boiled noodles or aromatic rice; the sizzling sound while sauteing veges and the sharp tinge of soya and worcestershire entering the nostrils, triggering your hunger more than ever, sending chills in your body, arousing every hormone; you’re imagining its face, its colors, how it looks up close, how strongly it smells when you take a large sniff at it; how badly you want to taste and feel it on your tongue & nibble on it slowly savouring each flavour,  feeling your food bite by bite; by now you’re so excited that when the dish arrives and how it looks matches your imagination and all that followed,  you just can’t help take a dive for the fork and knife for a rendezvous with the glorious food.. But.. Uh uh.. Let me instagram this first…  *click click*

Now that you’re back in the moment, you realize it’s not just you waiting to dine but others as well,  so you pick your stuff from the platter and pass it on. What you have on your plate is a deliciously hot and strongly aromatic beautiful chicken wing dripping with generous quantities of BBQ sauce that is now cooling down and getting sticky..

you want to scrape off and lick that stained sauce on the plate before it dries out, so you quickly begin to nibble on the wing, but oh it’s sooooo good, you are lost in the bite, partially because it’s damn hot and rest because it’s orgasmic! The smoke flavour is rich and the meat is soft, the sauce offers a dual bliss of being tangy and sweet and gives your mouth a variety of flavours. After licking the sauce off your fingers, you instinctively reach out for another, silently wishing the others won’t have more but they also love it equally!  … DARN!

So now you order another round of the dish and wish it would keep coming, but since it’s taking some time in preparation, you shift your focus to the other items placed on the table.

What’s that Khao Suey like dish with egg noodles mixed in yellow curry, strong on curry leaves aroma and piping hot.. Looks bland and probably not spicy… So you hesitantly take a small portion out in your plate and give it a try; it’s non spicy as anticipated but there’s something majorly missing in the basic flavour…  So you add a pinch of red spicy sauce and more than a pinch of garlic in olive oil paste they served separately for seasoning and Ohhhh! It was that garlic punch missing from the food and now it’s a pretty kickass dish!

Soft easy to break chicken chunks, with that sauteed curry leaf flavour quite high in every bite, and slurpy egg noodles leaving that garlic tinge in your mouth at the end of the bite was just wonderful. You’d never thought you’d have such amazing egg noodles with absolutely no stench or daunting egg flavour.  It was now perfectly balanced.

You start recommending the others to try it the same way, because you can see that they seem confused about the missing ingredient as well and when they listen to you and follow your direction, there’s a huge smile on their faces… yeah SATISFACTION!

Although you really want to sweep clean the dish but you also got to keep space for this other really tempting and super fragrant dish in a red bowl, whose name you couldn’t catch properly because it was just strange..

Something like,  Kway Teow Beef with Rice Noodles – this dish was topped with beautiful chunks of soft stir fried beef in soya, sitting there waiting to be devoured, with fresh steaming noodles underneath and lots of crunchy vegetables, this was liked by most on the table and was also reordered.

The other item presented on a clean white dish is Chilli Chicken with Rice, where you see less chicken and more onions, or maybe it’s hiding under the pile.

Avoiding rice (Coz much of the week had passed eating rice anyway) you just taste a spoonful of chilli chicken to have a flavour and find it overly loaded with onions, it was too “vegetably”, although the flavours were brilliant and rightfully spicy but the noodles took the victory over this one and hence you go back hogging onto the leftover bites of Kway Teow Beef and say Mmmmm

Now almost to the brink of explosion, both with happiness and fullness of your tummy, you decide to take a few slow breaths, making way for the last item of the day,  that is Dessert.

They put a beautiful looking, small and delectable piece of lemon cheese cake in front of you. 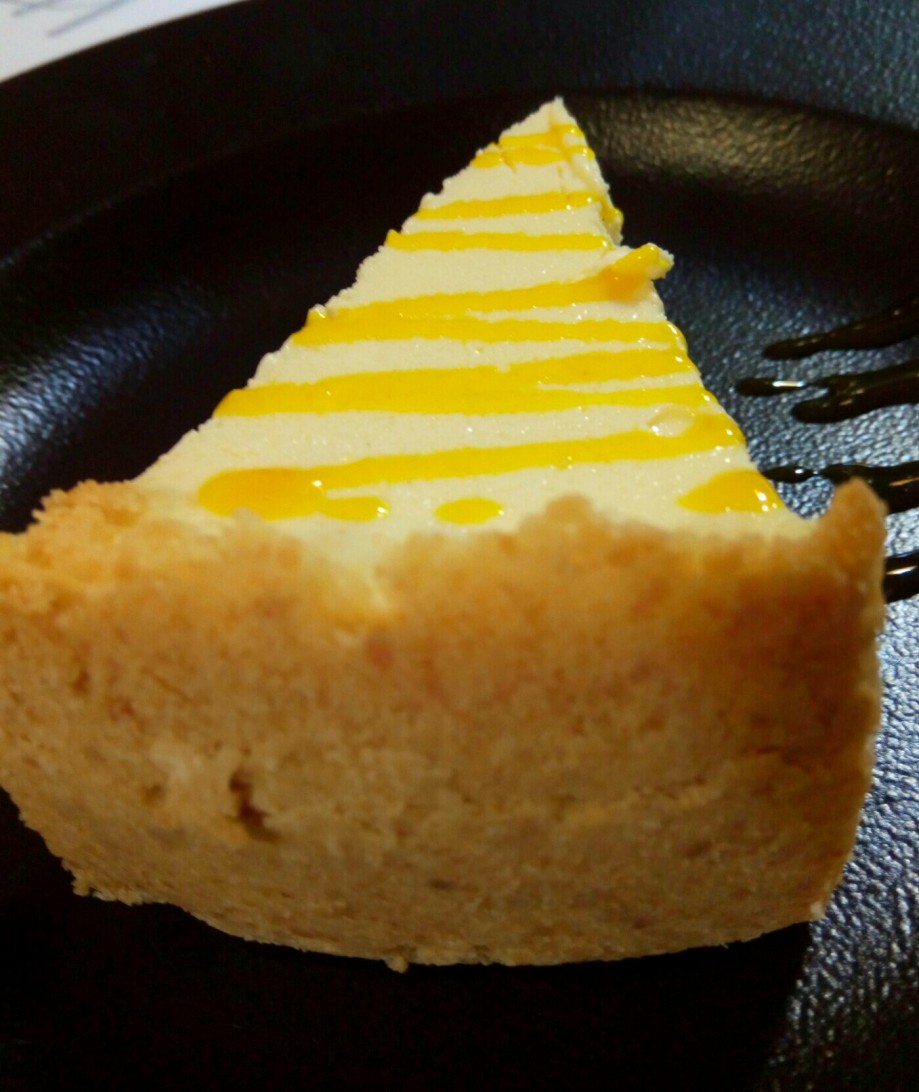 You’re loving the way it looks when you see its crust which doesn’t look crusty enough. It in fact appears moist and crumbly, which sort of disappoints you because your mind has already imagined a thick cream cheese bite with a fresh biscuit crunch, but here it is.. Not exactly like you’d thought..  Anyway,  you lean forward and make a go at it, ignoring the moist base,  eyes closed, you are drowning into the softness of the cake itself. Letting the cream cheese burst here and there inside your mouth, you sit still and take it slow..slower and slower…  Till its finally gone and you dive another round for the climax!

You’ve lost consciousness for a while, with all the bliss and excitement of feeding yourself well. Every pore of your body is happy and joyous and wants to keep coming back here for this experience.

Here is Dëshirë – An Asian Fusion Cuisine Restaurant recently opened at Bukhari Commercial, DHA. They serve fast and fresh wok meals with a small cosy ambiance and congenial staff to help you select your meals. Enjoy! 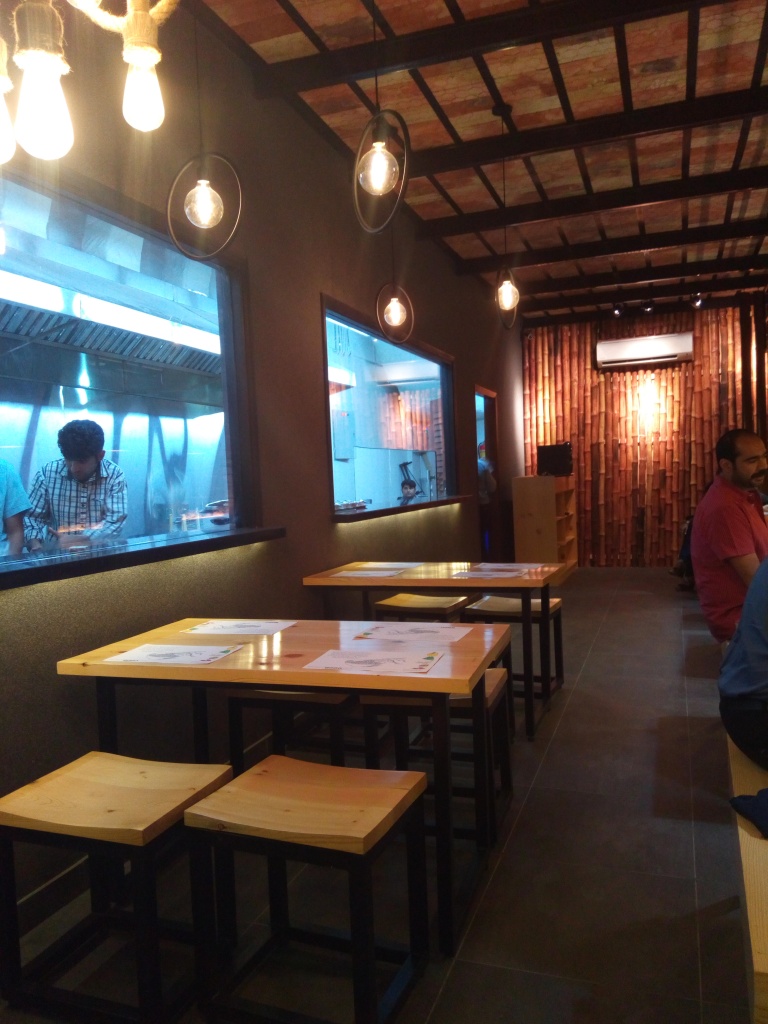